According to the National Automobile Production and Sales Data provided by the CCC, the total sales of cars in January 2018 were 1.049 million, a decrease of 20.6% from the previous month and a slight increase of 6.1% year-on-year. In the same period, the car quality network received 3173 valid complaints from the owners for cars, which was a slight decrease from the previous quarter and a sharp increase of 90.9% year-on-year. This month, affected by Honda's â€œacceleratorâ€ incident, the number of complaints from Dongfeng Honda Civic has soared by nearly 22 times. Therefore, the problem of â€œoil increaseâ€ has also become the top spot for sedan failure this month. The volume of complaints of "transmission setbacks" and "transmission abnormalities" remained high, with over 200 complaints. In addition, this month's engine abnormal noise, abnormal shock absorbers, abnormal sound of the brake system and audio and video system failures are also the focus of consumer complaints, and the relevant complaints have exceeded 100 cases. 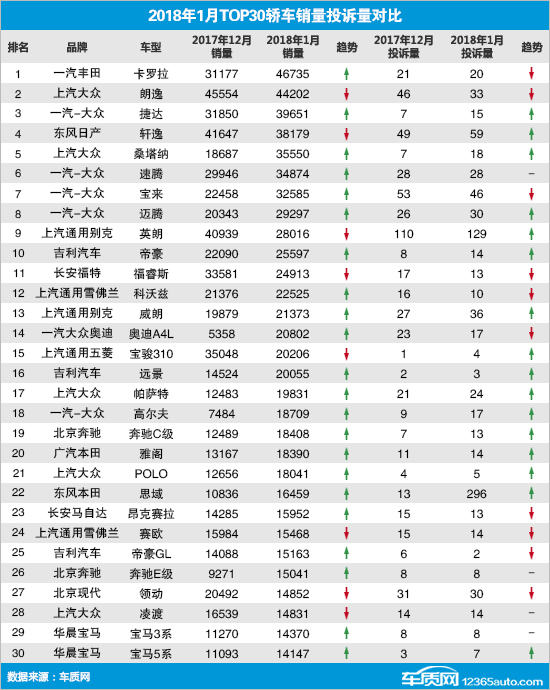 New year new life. The TOP list in the first month of 2018 has undergone major changes from December 2017. There are a total of 10 new models on the list, all of which are joint venture brand models. Among them, the Audi A4L, the Mercedes-Benz C-Class and the BMW 3 Series reunited. The last time the three models were listed was in August 2017. In 2017, Audi staged a big reversal to win the luxury brand sales championship. It can be said that the Mercedes-Benz and BMW have hit a lot. In 2018, the three brand-named kingpin models will gather together on the TOP list. It is easy to see that between 2018 BBA The trend of intense competition will further escalate. From the top 10 list, the change is also evident compared with December 2017. Jetta and Corolla returned to the Top 10 on the TOP list. Among them, Corolla topped the list with 46,735 cars. It was only because of its high and low sales performance. In addition, Bao Chun 310 and the leader failed to continue the previous sales performance fell out of the top 10 list; Geely emgrand is firmly in the top ten position, very gratifying.

1. The destiny of the civic 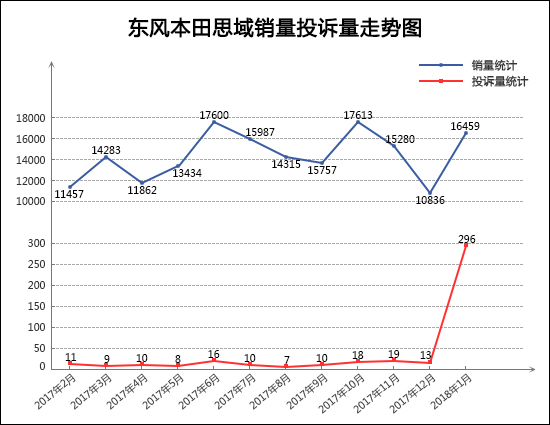 At the 2016 Beijing Auto Show, Dongfeng Honda's new Civic was officially launched. It has injected new vitality into the already very sluggish Civic models. It has achieved monthly sales of 10,000 yuan soon after its launch, and it has become a popular model sought after by consumers. It has even emerged. The situation of raising prices by car is hard to find. Honda is known as the "buy engine delivery vehicle," although this is only a paragraph in the car circle, but from the side also shows that Honda's engine performance and reliability are very good, deep consumer trust. Because of the emphasis on the new civic, Honda will take the new 1.5T Earth Dream Engine to the new civic. This is also the biggest magic weapon that Civic can boast at the same level.

However, when we were still waiting for the time when we could not mention the Civic without increasing the price, Honda's â€œoil throttleâ€ incident broke out completely in January 2018, and the Civic naturally could not be left alone. The culprit was this new 1.5T. Earth dream engine. The incorporation of gasoline into the engine oil caused an increase in engine oil anomaly, which became a problem for many Honda owners. In response to this incident, Car Quality Network paid close attention to and published several reports (see â€œThe CR-V Oil Depletion Is Undoubtedly the Only Choiceâ€). "Honda's top ten major vehicle models in China fall into "Oil Throttle" and "Dongben extended warranty is a good thing but did not open all question marks"). Subsequently, Dongfeng Honda issued three statements within a month and gave the final solution, planning to recall CR-V and Civic models. However, the final solution given is ridiculous, and it is hard to imagine that this is the ultimate answer given to consumers by a joint-venture vehicle company that sells over 700,000 vehicles annually.

Car quality network data shows that in January 2018, the number of complaints from Civic was 296, an increase of nearly 22 times from the previous month! Even more frightening is that this number is still growing. From the sales volume complaint volume chart of the Civic in the past year, we can see that after creating a new sales volume in October 2017, the sales volume of Civic dropped for two consecutive months and did not recover until January 2018, but it also encountered "Oil throttle" incident, coupled with manufacturers' inaction on product defects, made people sweat for the fate of Civic's future. 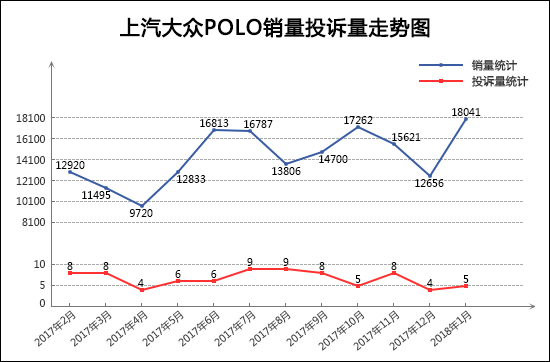 I remember that POLO was mentioned in the TOP list last time in May 2017, when its sales just got out of the trough and maintained a good upward momentum. This â€œmagical boyâ€ that is quite popular with consumers still maintains a youthful admiration and becomes a beautiful scene in the waning small car market. After several rounds of ups and downs, POLO's monthly sales have finally reached a new high in the past year in January 2018, ushering in a good start. It is not difficult to see from the charts of sales complaints in the past year that the sales of POLO have been ups and downs but have generally kept rising. What is commendable is that the monthly complaint volume in the past year has remained stable in single digits, and a good quality reputation has laid a solid foundation for sales growth. In 2017, the sixth-generation POLO has been officially listed overseas. It is expected that the domestic version of POLO will be formally released this year. Although the specific time is not yet clear, it is undoubtedly for the fifth-generation POLO that has been in service for seven years in China. It is a powerful potency agent. In 2018, it will be a year for POLO. The magical wish of "Magic Boy" will be realized.

3, regain the glory A4L still need to have the heart of the king 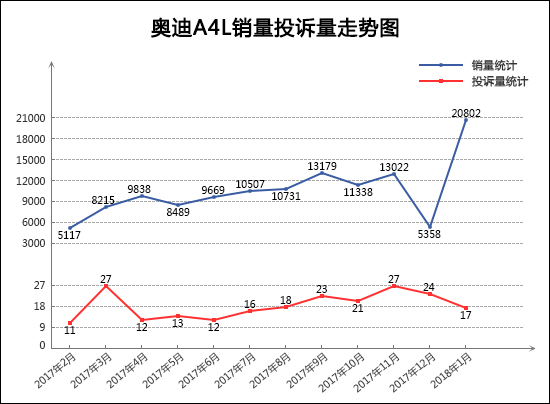 2017 was undoubtedly a thrilling year for Audi. From the continued sluggish sales in the first half of the year to the second half of the year, until the end of the year was full of dramatic comebacks, Audi completed this "impossible mission." This is also reflected in the sales performance of Audi's A4L, the main sales model of Audi. Looking at its sales charts for the past year, starting from June 2017, sales of A4L have started to increase steadily. More than 10,000 vehicles. Surprisingly, A4L's sales fell to the bottom in December 2017, and the opinions of the public were divergent. In fact, the performance of the Audi A4L after the new replacement is indeed not satisfactory, it can be said that it has not reached everyone's expectations. However, despite this, the A4L still contributed 118,000 units to Audi's championship in 2017, and the 21% year-on-year increase was the highest growth rate for Audi.

When the industry speculated about why A4L sold in December 2017, the A4L gave us a surprise in the coming years. It has to be said that making drama is a good thing for Audi. In January 2018, the Audi A4L sold more than 20,000 units in a single month, an increase of nearly 3 times from the previous period. This also made people have to suspect that Audi was making a good start in 2018 and deliberately controlled the A4L sales in December. In any case, this is the first time that the first shot is enough to beat, but whether it can maintain such a good state also requires the manufacturers to take seriously the product's quality reputation and the consumers' complaints. According to the car quality network data, the monthly complaint volume of A4L in the past year has been maintained at 2 digits, and its complaint response rate in January 2018 was only 5.9%. From the perspective of luxury brand sales in 2017, Audi reversed the championship, but its sales increased by only 1.1% year-on-year. Compared with BMW's 15.1 and Mercedes's 25.9%, there is no doubt that it has lagged behind. To protect the throne of luxury brand sales, Audi should Have a good reflection. 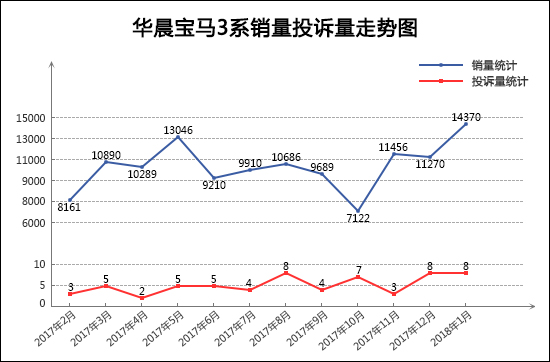 Compared with the Audi A4L, the sales of the BMW 3 Series in the past year have been quite turbulent. However, on the whole, the number of monthly sales has remained 10,000. In the past 2017, the BMW 3 Series, BMW's main sales model, contributed a total of 143,000 units, a year-on-year increase of 24.3%, which helped BMW achieve a year-on-year sales growth of 15.1%. In 2018, the BMW 3 Series also made a good start. In January, the 14,370 set achieved a new high in sales in the past year, a year-on-year increase of 25.2%. Judging from the complaints of the BMW 3 Series in the past year, the monthly complaints are maintained in single digits. It can be said that the performance in terms of quality of word of mouth has an absolute advantage in the BBA. In 2018, the competition between the BBAs will further increase, with more than 10 products launched by Audi and BMW. The competition between the champions and the runners-up will continue between the two. Whoever wins or loses will not be able to predict, but excellent product strength Plus a stable quality word of mouth will undoubtedly be a weapon to win. From this point of view, the sales of the BMW 3 Series will rise steadily and rise to a new level.