After the cable is faulty, the fault type is usually judged with a 1500V or higher shake meter or a high resistance meter, and the fault is determined by using different instruments and methods. The fault point is then accurately determined by the fixed point method. The precision methods of the fault point are induction and acoustic measurements. Two kinds of law.

Sound measurement method, the principle is to use high-voltage pulses to promote fault discharge, resulting in discharge sound, with the sensor on the ground to receive this discharge sound, to detect the exact location of the fault.

The specific fault type is tested as follows.

The single-phase low-resistance grounding fault of a cable means that the resistance of one core-to-ground insulation of the cable is lower than 100 kÎ©, and the continuity of the core wire is good. This kind of fault concealment is strong, we can use the principle of the loop fixed point method to test. Wiring diagram shown in Figure 1a, the fault core wire and another intact core wire to form a measurement loop, measuring with a bridge, one end with a jumper jumper, the other end of the power, bridge or galvanometer, adjust the bridge resistance The bridge is balanced. When the material and section of the cable core are the same, the following formula can be used to calculate. If the damaged core and good core are exchanged on the bridge, the Z-measurement end The distance of the fault point m; L - the total length of the cable, m; R1, R2 - the resistance arm of the bridge.

Under normal conditions, the measurement results of the two wirings should be the same, and the error is generally 0.1% to 0.2%. If it is out of this range or X>L/2, the measuring instrument can be moved to the other end of the line for measurement.

In addition, we can also use the continuous scanning pulse oscilloscope method (MST-1A type or LGS-1 digital tester) for testing. The reflected wave at the short circuit or ground fault point will be a negative reflection. In this case, the distance of the fault point can be calculated by the following formula: Xâ€”reflection time Î¼s; Vâ€”wave speed, m/Î¼s.

b. The measurement loop should bypass the branch box or transformer and power distribution station as much as possible. The shorter the better.

c. DC supply voltage should not be less than 1500V.

d. The negative pole of the DC power supply shall be electrically bridged to the cable conductor, and the positive pole shall be connected to the inner sheath of the cable and grounded.

When a two-phase short-circuit fault occurs, the measurement wiring method is shown in Figure 2. When measuring, any fault core wire can be used as the grounding wire, and another faulty core wire can be connected to the bridge. The calculation formula and measurement method are the same as the single-phase low-resistance grounding fault point.

(1) Since the measurement is conducted under high pressure, it must be insulated from the ground. The operator should wear insulated gloves, operate with an insulating rod, and maintain a distance from the high voltage lead.

(2) The core wire should not be measured in the same cable and must be grounded to prevent dangerous high voltages from being induced.

(3) Gradually pressurize the measurement. If you find that the pointer of the ammeter is shaking or flashover failure, stop measuring immediately to avoid burning the instrument.

(4) When the measurement is completed by the positive connection method and the wiring needs to be replaced, the voltage must be reduced, the power supply must be cut off, and only the residual charge in the loop can be exhausted. The reverse wiring method can be used to change the wiring.

The so-called complete disconnection fault means that each phase is well insulated and one or more phase conductors are not continuous. At this point, two methods can be used for testing.

Measure the ratio of the faulty capacitor to the standard capacitor at the two ends of the line to determine the distance to the fault point. Calculate the capacitances measured at the E and F sides of the fault phase with CE and CF as the formula below.

Using the oscilloscope method, the pulse is transmitted. At the break point, the reflected wave is a positive reflection. The distance of the fault point is calculated according to the following formula: Vâ€”wave speed, m/Î¼s; Tâ€”reflection time, Î¼s.

In addition to the above situations, some failures may occur, such as:

(1) Completely disconnected and grounded faults. This fault is characterized by good insulation at one end and grounded at the other end. We can use the complete breakage fault point test method.

(2) Incomplete disconnection and grounding faults, such failures are manifested as good insulation of each phase, one or more phase conductors are not completely continuous, and resistance grounding can be used to test the high blocking line fault according to the AC bridge method.

(3) Flashover faults. The so-called flashover faults show that the insulation resistance of each phase is good, and the continuity of the leads is also good, and the fault point is closed. A high-resistance ground fault can be used to scan the oscilloscope at one time (Model 711), or it can be tested by other methods after burning.

Fins are the basic components of plate&bar heat exchanger, on which heat transfer to be finished depends. Main fins: offset fin, straight fin, perforated fin, louvered fin, corrugated fin. Our fin engineers have the most professional and enriched experience with more than 10 years to design and produce all kinds of fins forming moulds. We supply all kinds of fins, fin forming moulds, fin forming machines. 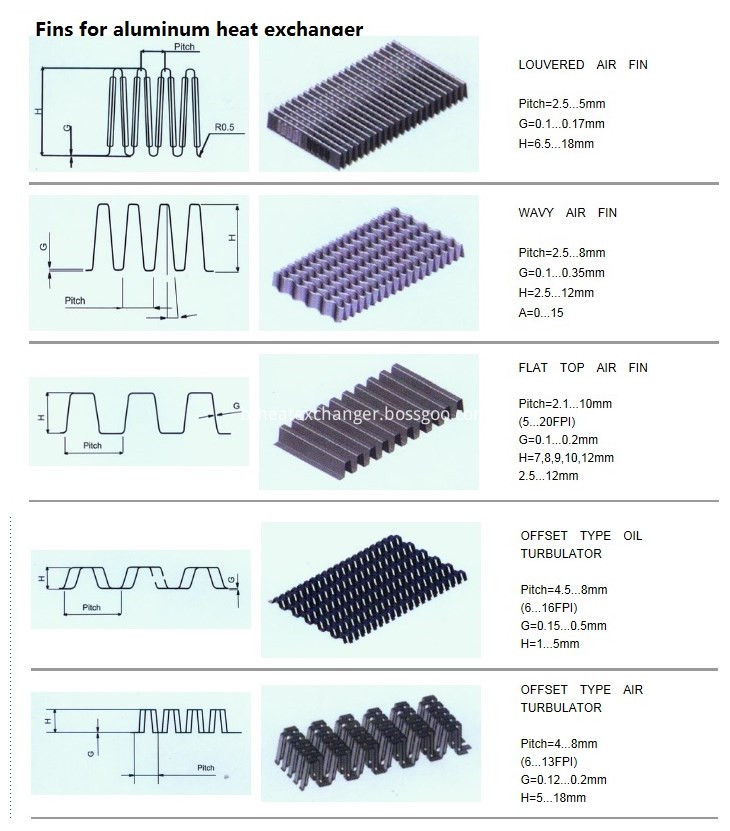